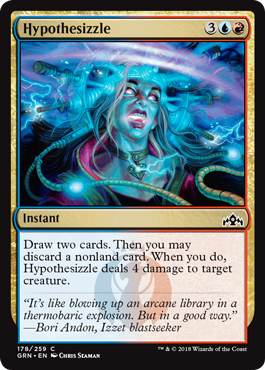 There’s nothing hypothetical about my love for this card. It’s a card draw spell that also impacts the board—think of it as a 5-mana Divination that draws you a 0-mana deal 4. That’s a very good deal, even if you have to discard an actual card instead of just a land. Note that this doesn’t target when you initially cast it, and only does once you’ve discarded a nonland card (thanks to some rules trickery I won’t go into). I really like this card, and think it’s quite powerful. Any Izzet deck will want multiple copies, and I bet it’s worth splashing in Dimir sometimes.