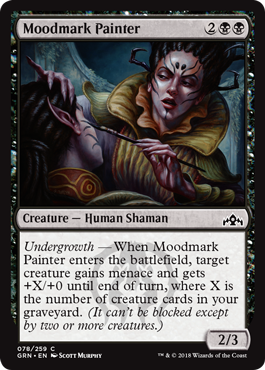 Undergrowth doesn’t seem that well-supported in this set, so I’m wary of the rewards that require a lot of creatures before they pay you off. At least Lotleth Giant costs 7, so you should have a well-stocked graveyard by then, whereas Moodmark Painter really wants to come down early but likely won’t grant a whole lot until later. Menace also falls off later in the game, so I’m not really sure how this fits into most decks.